DEATH IN THE ALPS Since his accidental discovery in 1991, newspapers and journals have carried reports about him, the Italian-Austrian border has been re-surveyed to determine his ownership, scientists continue to investigate him, and a Museum of Archaeology has been established to house him.

We missed our connecting train so were late arriving at Bolzano in Northern Italy. Dropping our bags at the hotel, we hurried through the city’s old and narrow streets, reaching the South Tyrol Museum of Archaeology just in time for the day’s final admissions to see Ötzi the ice-mummy. A German couple hiking in the Ötztal Alps of Austria and Italy found Ötzi. At first they thought they’d stumbled across the corpse of a mountaineer, but very quickly it was realised Ötzi was over 5000 years old. He had become visible because the glacier in which he’d mummified had melted. 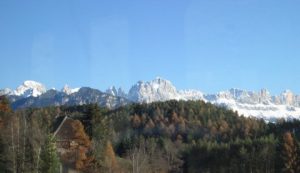 Three floors of the museum display exhibits relevant to Ötzi. They include a lifelike wax figure made from the detailed measurements of Ötzi’s skeleton, particularly his skull. It’s a visual contrast with his dark, somewhat twisted mummy which you can view through a small square square window like one in  a prisoner’s door. Ötzi lies on a slab in his cool cell that’s kept at a constant temperature.

Scientists have investigated very many aspects of Ötzi. Head injuries and an arrowhead lodged in his shoulder raised questions about his cause of death. Had he been in a fight? Had he bled to death from the arrow wound. Had he fallen into a stream (no glacier there in those days) and hit his head after being wounded by the arrow? You can see a reconstructed and lifelike Ötzi for yourself and read about the research and findings here

Beautiful Bolzano at the foot of the Dolomites in the South Tyrol has a treasure that’s fascination continues for visitors and researchers alike.