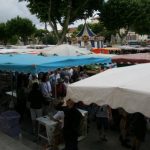 It’s one of those quirky things: when you visit a place where the sun apparently shines 300 days a year, it rains the few hours you’re there. Despite it being summer, we joined hundreds of tourists and townspeople donning ponchos or raising umbrellas to make our way through the cobbled streets and square of Saint Remy in Provence. It was market day in the small town associated with Nostradamus and Vincent van Gogh.

We had driven past fields slashed with scarlet poppies, bringing World War 1 to mind. 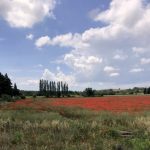 On the roadside a few blue cornflowers nodded. Once cornflowers were common growing wild in the fields and they, rather than poppies, are worn by the French on 11th November in memory of the fallen. In the Saint Remy district mauve tracts of lavender were soon to be harvested, while in the rain cicadas, emblem of Provence, remained quiet but were well represented as brooches and on linen and ceramic ware in small shops and the market stalls. 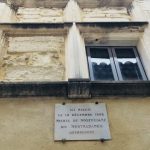 Avoiding puddles, we walked along a narrow street to the house where Nostradamus – physician, astrologer and prophecy maker – was born more than 500 years ago. In another part of the small town is Saint Paul de Mausole which in van Gogh’s day was an asylum and which still treats psychiatric patients. Van Gogh entered when he cut off his ear, and in the twelve months he remained there had a prodigious output including perhaps his most famous painting – Starry Night. 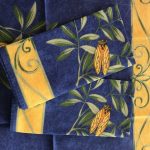 watched stall holders making the best of a bad day beneath dripping awnings. Local women hurried by with baskets full of breads, cheeses and fresh produce while we, like other tourists, bought Provence linen to take to our homes around the world. Back home I opened the book Van Gogh by Pierre Cabanne that had been a twentieth birthday gift from my parents and read it again, this time with a greater understanding of the inspiration for many of van Gogh’s masterpieces.

A FEW BOOKS ABOUT VINCENT VAN GOGH AND NOSTRADAMUS