A SAINT, A SON AND SWEETS arrived in Salzburg when celebrations for St Rupert’s Day were in full swing. 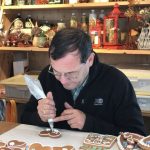 While Rupert is the patron saint of Salzburg, Mozart is Salzburg’s son. Reams have been written about and by him. The third floor apartment of the renovated mediaeval house where he was born is now a museum that has expanded to include other floors of the premises. His own instruments and other memorabilia of his life are displayed along with playful letters he wrote to his mother and sister while he was away on tour with his father. 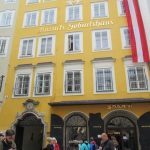 It’s sobering to know only two of Leopold and Anna Maria Mozart’s seven children — Wolfgang Amadeus and his sister Maria Anna, known as Nannerl, survived. Since both were gifted, you can’t help wondering what the siblings who died might have been like musically. It’s also sobering to discover the Mozart family lived in this one bedroom apartment for over twenty years before moving to a very much larger apartment in the Dance Master’s House across the river, now also a Mozart museum. A room there is dedicated to Mozart’s two sons. 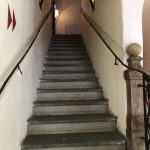 We brought home a collection of Mozart balls. Delicious, yes, but a transient pleasure. It’s Mozart’s music that endures.

A FEW OF THE MANY BOOKS ABOUT MOZART